Well the dog days of summer will be wrapping up shortly and we will soon be heading into the fall and hopefully cooler weather which can only mean one thing – football season is upon us and it’s going to look and feel a bit different as we kick off this next decade of A&T football.

The Aggies are no longer exactly the hunted at least initially as they have moved out of the Mid-Eastern Athletic conference and is starting anew in the Big South.

How will the Aggies match up playing a Big South schedule is still open for debate but according to the league’s coaches, A&T will finish no less than third behind the conference’s traditional front runners Monmouth and Kennesaw State. All three teams are ranked in the FCS Top 25 which is a Big South record so there will be a lot eyes cast on this year’s race with a definite bent toward those weekly rankings and jockeying for those choice seeding for the FCS playoffs beginning in late November.

It will be a first time out against not only those teams but programs like Robert Morris and North Alabama. A&T has had some prior experience with Big South competition locking horns in recent years with former member and now FBS Coastal Carolina and Gardner Webb.

Just last year A&T went on the road and beat a scrappy Charleston Southern team behind a strong second half offensive performance. A&T and Hampton will reunite on the field after a three-year hiatus after the Pirates left the MEAC for the Big South three years ago. Now they are conference foes once again.

This year’s Aggies are coming into the season as squad having come off a huge layoff, missing all of 2020 after the MEAC opted not to play last fall in the midst of the pandemic. A&T along with four other schools decided opt out of the shortened spring season which left them plenty of time to extensively train, recruit, build a lot of depth, consume a lot of film, and work on the mental and physical preparation for fall.

How deep is A&T after being out of the limelight for almost two years? Coach Sam Washington returns 13 seniors with additional eligibility because of the Covid allowance given by the NCAA, 11 of which have already graduated and nine of those graduates having an extra two years of playing time left to them along with 41 returning lettermen. Experience should not be an issue.

Covid, although it canceled the 2020 season, allowed for the accumulation of a lot of talent especially along both interior lines, a topic will explore due course as we go through this series.

Today in Part 2 of this year’s 5-part preview series we examine one of the deepest positions on the 2021 squad – the receiving corps.

Fans will remember that A&T’s wide outs completely torched SWAC champion Alcorn State in the last Celebration Bowl. Gone is all-time record holder Elijah Bell but the A&T coaching staff has been extremely busy during the year off recruiting and this year’s group, at least on paper, may be one of the best, collectivity, ever for this program.

The Aggies may be adding a little something extra in it passing because of the off-season stocking of the tight end position. Usually used as an extra blocker in the running game A&T seldom utilized the tight end except in short yardage or goal line situations.

That is probably is now a thing of the past since the Aggies have actually added 4 new pass catching tight ends to this year’s roster to compliment the vertical passing attack. There is great competition going for the lone starting spot this year and it may come down to the week before the season’s opener before that position is finalized.

Most fans are aware of 2020 signees M. J. Frazier (6-5,245, Jr.) and former all conference performer Nick Dobson (6-3, 240, Fr.) from Wallace-Rose Hill High School. Frazier is a transfer from Kent State who was originally recruited out of Jireh Prep in Charlotte as a defensive end but made the switch to offense upon his arrival there.

Dobson, a big target with good downfield speed, is a former N.C. Shrine Bowler from Teachey, NC where he amassed 535 yards and 9 touchdowns as a All-State pick his senior year.

New to the roster this season is red shirt sophomore Deamondre Goodwin (6-4, 225) from Hopkins, SC. Goodwin was a 3-star prospect coming out of high school who had FBS offers from Coastal Carolina, App State, and Georgia Southern before a injury sidelined him early in his senior year back in 2018. Now completely healthy, he’s expected to display the 4.56 speed and big hands that made him a top high school prospect two years ago.

A&T may have gotten a very quiet steal when they acquired Deandre Gaskin (R-So.) from D-II Mars Hill. The 6-3, 233 pound transfer snagged 335 yards with 5 touchdowns while doubling as a defensive end gaining an all-conference selection as a senior at Asheville High.

Korey Banks is positioning to be one of the next A&T players to gain pro football attention as he enters his final season as one of the better big play slot receivers on the NFL draft board this fall.

Taymon Cook (6-0,180, R-So.) transferred into A&T a year ago from Marshall and saw a little action in his first year as he learned the offense. This year the 4.33 speedster is expected to really make his on field presence felt as a every down receiver as well as a companion return specialist along side Banks on special teams.

Jamison Warren (5-11,180, 4.4) might be an untested freshman behind the more experienced Banks and Cook in the slot but he’s not lacking for talent. The former East Forsyth product comes to A&T after finishing his prep career with the MVP trophy for his explosive performance in his team’s state championship win in 2019.

There’s a lot depth at the wide out spots and the competition for playing time will be intense because of all of the size, speed, and experience that is available to new receiving coach Nat Poole.

With the departure of Elijah Bell, fans are hoping that sure handed H-Back/tight end Quinzel Lockhart (6-3, 200, R-Jr.) will be able to slide in and assume the role of the physical receiver on the outside. Lockhart was undersized playing in the tight end role but he was one of A&T’s most reliable receivers grabbing 19 receptions for 248 yards and two touchdowns. Moving to the outside should give him the opportunity to showcase his route running skills.

Right on his heels will be Virginia Tech transfer Elijah Bowick, a former 3-star prospect by Charlotte’s Myers Park high School. Bowick fits the mold of a big physical guy at 6-2, 218 who is not timid about going up into crowds for the ball. He has better than average speed (4.55) with huge hands to match.

Senior Zach Leslie (6-4, 210, 4.46) is the Aggies primary deep threat who can stretch the field with very deceptive speed. Leslie pulled in 652 yards and five TDs on 42 receptions. He’s an extremely intelligent route runner who has a knack for finding the open space whether it be zone and man defense. Slowed in the offseason from foot surgery this past spring, he may be slowly eased into action as a precautionary move once the non-conference season starts.

Ron Hunt (6-3,190, Gr.) fought through all kinds of nagging injuries in 2019 missing all but the last three games of that season but he brings with him a ton of experience and lots and lots of speed (4.34). If he can stay away from the injury bug, he could poised to have a super senior season and be that major cog in the A&T pass offense.

Jordan McDaniel (6-0,185, Jr.) is another very experienced receiver who has bided his time for a couple of seasons as a resrve and is now ready to assume a more active role in the passing game.

One guy who won’t be eased into the rotation but will probably see action right away is true freshman Sterling Berkhalter (6-5,190), who came in as a highly recruited 3-star early enrollee, made an immediate impact during spring practice and proved he will be a force to reckoned with. Berkhalter was rated the No. 3 prep school receiver in the nation coming out of Georgia Prep Academy and is a native of Cincinnati, OH.

Nick Wilds-Lawing (6-4,185, R-Fr.) was recruited as a QB in 2020 but after agreeing to try his hand as a receiver , he wowed everyone including Head Coach Sam Washington with how he immediately took to the new position and dominated in spring practice. His ability to make people miss and rack up a lot of yards after the catch will earn him a lot of playing time this fall.

Prestige Edwards is another long rangy wide out at 6-5, 200 who red shirted as a freshman in 2019, missed spring practice earlier this year, but is now back giving the Aggies additional quality depth behind the projected starters. 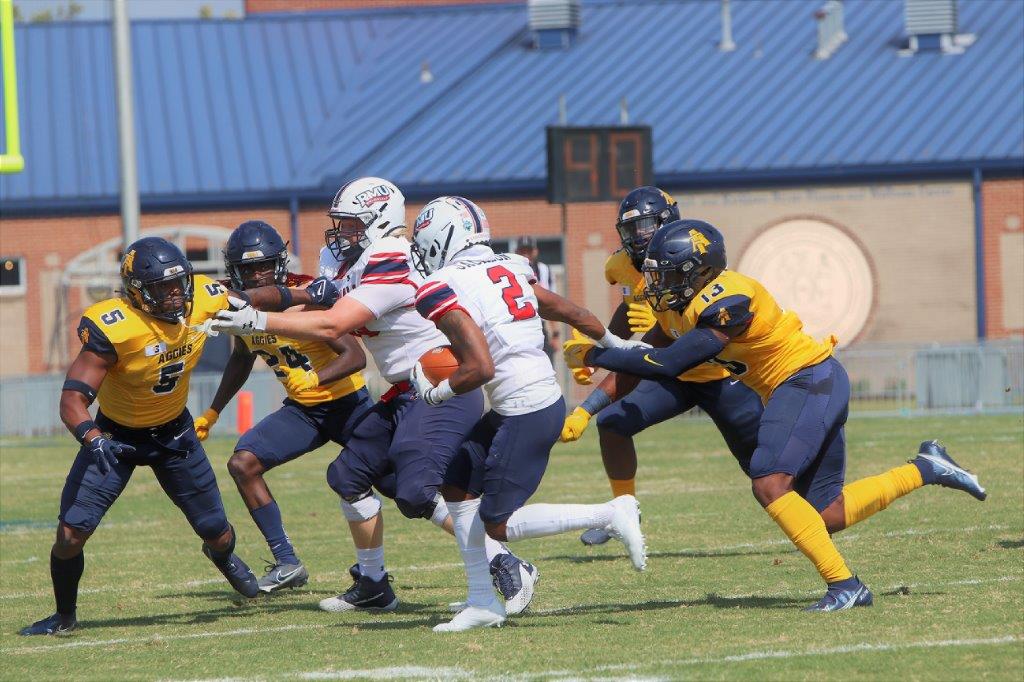