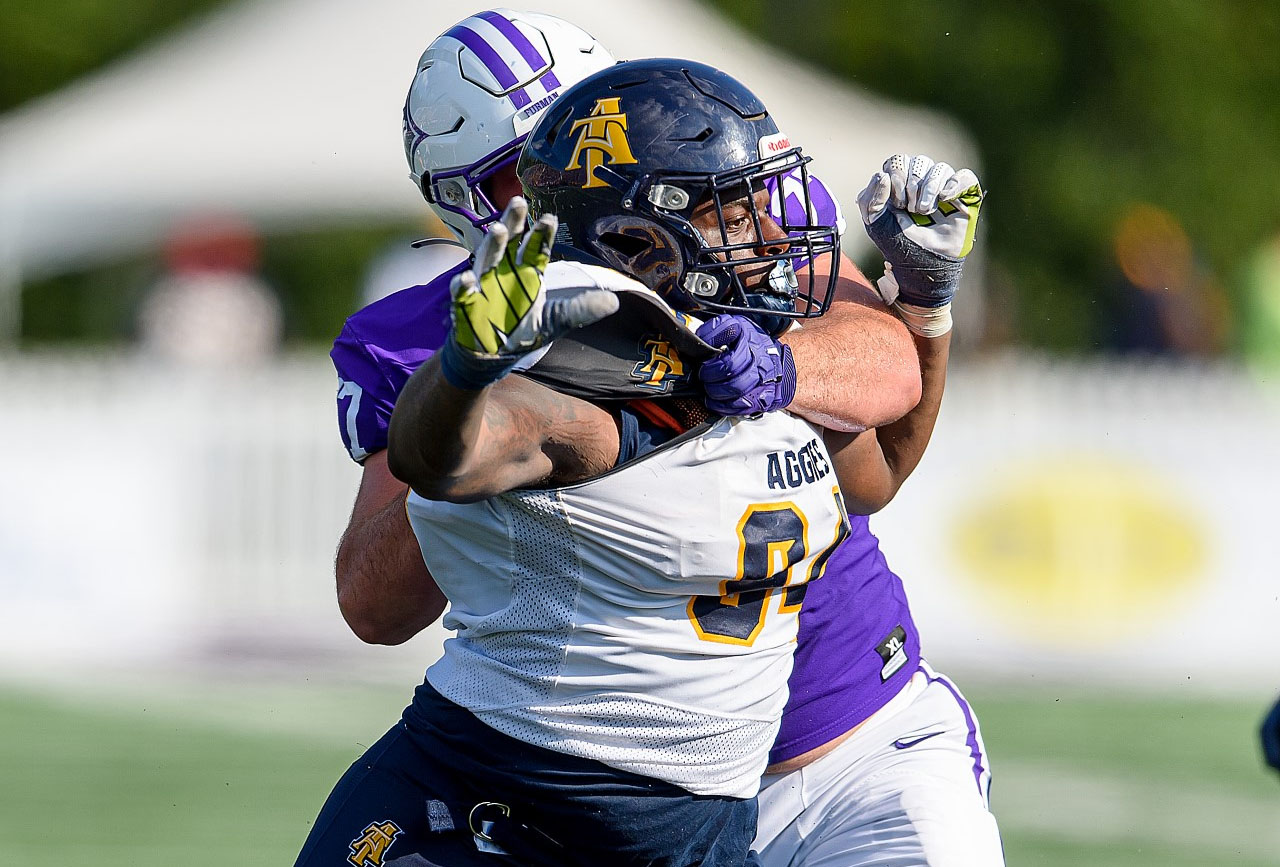 As the stats read, Fowler was literally 50-50. He had to jumpstart the offense on the team’s second drive, repeatedly finding Korey Banks across the middle of Furman’s soft zone, leading to a field goal. His throws were on target, but he was not operating in the rhythm of the offense, as Furman dared A&T to run the football with Jah-Maine Martin (12 carries, 33 yards).

In the second and third quarters we got the good, the bad and the ugly.

The good: Fowler was able to connect on deep balls with Ron Hunt (5 catches for 146, 2 TDs) and gave the fans some hope.

The bad: He also missed several attempts high and behind receivers, which either killed drives or forced long situations.

The ugly: Fowler threw a costly pick inside his own 40-yard line, and on the next series fumbled while diving for the goal line. Both turnovers were converted into Paladin touchdowns.

In the fourth quarter the Aggies got not one, but two opportunities to tie the score by forcing turnovers inside the Paladin 40 yard line. However, Fowler could not find a receiver either time and the team could not capitalize.

Overall, Fowler was ok, and will likely improve. He did show touch in his passes and was decisive in most of his deliveries. The 74-yard touchdown to Hunt was a thing of beauty, and I’m sure Coach Barnette is kicking himself for not trying more deep throws. Remember, A&T’s offense didn’t necessarily go bombs away until the Celebration Bowl in 2019, and there will be more opportunities to do so as more defenses sit on Martin.

Running Backs: Martin didn’t get much help today from either his teammates or his offensive coordinator today as we saw a lot of predictable first down runs in between the tackles. It seemed like we were waiting for him to hit a seam, but the seam never came. He also was stuffed on two critical third and short runs as well, and the lack of confidence in the running game may have cost A&T a chance to go for it on an early 4th and 2 at the Paladin 43-yard line. Kashon Baker got a few opportunities but didn’t get much either.

Wide Receivers: Hunt and Banks (5 receptions, 66 yards) were the story today as they took advantage of open space in the middle and deep posts, Hunt’s specialty. We saw the unveiling of rookie Sterling Berkhalter, who made two catches. We hope that the JUMPBALL U, who missed Zach Leslie, will get plenty of more opportunities on Friday. Charlotte’s Chris Reynolds shredded Duke’s secondary for 324 yards and three TDs on last Friday.

Offensive Line: Whew, the layoff REALLY hit hard here. The line seemed out of sync and most of the time, the Paladin defensive line drove them backwards, particularly into Martin. However, Fowler DID have time to throw and plays were made on a few drives with varied play-calling. Midway through the third quarter, down 23-3, the line put together its best drive of the game – an eight play, 53 yard series. Martin had a 14-yard run, Berkhalter converted a third down with an eight-yard catch, and Fowler had all day to hit Hunt for his second TD of the afternoon, a 16-yard catch right in the middle of the seam in a tight window. That drive showed grit, determination and will be a highlight during a short week.

Defensive Line: Typically, you expect the defense to be ahead of the offense in a long layoff, and Blue Death held up pretty well against the run, despite having to deal with a run-by-committee approach from Furman. Three backs had at least six carries with Devin Wynn getting 18. While the yardage wasn’t much, it forced the Aggies to respect the run-pass option, and completely opened up the passing game. Hamp Sisson had virtually a clean jersey as only Robert Porcher got to him for the Aggies’ lone sack. Sisson ended with 362 yards on 25-40 attempts with 3 TDs. Forty-Nine of the 125 rushing yards came in the final, time consuming drive of 4:30, which ended in a field goal that put the game away. Overall, the line spent too much time on the field. (Aggies were 3-12 on 3rd down).

Linebackers: A long day indeed. Two questionable (at best) ejections for targeting to starters Alex Fumbah and Jacob Roberts put the crew in a near panic early. The absences really took a toll in the fourth quarter on the final drive. But the replacements held their own in the second half, getting consecutive fourth quarter turnovers with a fumble recovery by Richie Kittles and an interception by Tyquan King. The bend but don’t break group tackled well and showed they will be as good as advertised with the depth they have.

Secondary: A friendly fire head injury to Virginia Tech transfer DJ Crossen forced him to be taken off the field on a stretcher and clearly shook everyone. We all send our best wishes to him and his family. That brings us to the play of the remaining secondary, which is the immediate concern right now. Wynn and Ryan Miller completely exposed the secondary on slants. Several times two defensive backs went to the receiver on the perimeter, leaving Wynn or Ryan Deluca wide open. Miller took a short slant for an 87-yard touchdown, outrunning all four backs, and Josh Harris also scored on a 41-yard slant over the middle. Back-breaking third down conversions were allowed by A&T defenders playing off the ball in medium and short yardage situations. The Blue Devils will come to run the football but they also proved that they could throw against Charlotte. Therefore our secondary cannot fall asleep keeping an eye on running back Mataeo Durant, or they will be beaten by wide receivers Jake Bobo and Jordan Waters.

Special Teams My major concern pre-game was kick coverage. However, that was one of the best areas of the day. Furman got virtually nothing on returns and Michael Rivers averaged 41.2 yards on five punts, all in the first half. Banks figured HUGE here, with a 47-yard kickoff return with the Aggies down 23-3 and it led to a touchdown. Andrew Brown had several good kickoffs and was trotted out to kick three field goals: one good from 47, a push left from 38, and a fumbled snap from Kingsley Ifedi (the first game holding for a player not named Kylil Carter since 2015).

Intangibles: This loss is agonizing when you add it up. The Aggies were literally out of this game and promptly hit quick strikes to get them back in it. But the Fowler fumble at the goal line, the zero points on two fourth quarter turnovers, and punting on the Paladin 43 yard line really stick out here. As a fan, you love the fact that this team did not quit and did not put their heads down after Fowler’s two turnovers gave Furman a 23-3 lead. The team played through adversity and gave themselves an opportunity. The great thing is that the team can put this one behind them and they get a short week to play against a bottom tier Power Five foe, Duke, once again. Hopefully some missing players can get back on the field Friday.

Mistakes are correctable and everyone, even the coaching staff, will improve this week. (10 penalties for 105 yards – remember two targeting, one for offensive pass interference to prevent an interception)

N.C. A&T starts the 2021 football season with a loss against Furman

Aggies Lose at Furman In Return to Competition