Highly coveted defensive back transfer Karon Prunty sent shockwaves throughout the college football world today when he announced that he had signed a Letter of Intent to play at North Carolina A&T.

Prunty, a 6’1, 190-pound native of Portsmouth, Virginia, started all nine games as a true freshman for Kansas in 2020 before transferring to the University of South Carolina this summer.

During his lone season with the Jayhawks, Prunty recorded one interception, nine pass breakups, 26 total tackles, and one tackle for a loss.

He was ranked 7th in the nation among defensive backs with a completion percentage of just 38.5 percent. Afterwards, he was named All-Big 12 Honorable Mention and selected to the True Freshman All-American team.

Prunty is considered by football scouts as a prototypical shutdown corner, displaying natural ball skills and NFL size. He is also expected to be a contributor on special teams.

When he announced his decision to transfer to South Carolina this spring, Prunty cited personal reasons and a desire to be closer to home. However, despite being projected as a starter for the Gamecocks in 2021, he entered the transfer portal for second time in August after spending just one month in Columbia.

With this signing, A&T has now addressed one the top areas of need head coach Sam Washington said he wanted to target this offseason. The Blue Death secondary was torched by opponents through the air in 2021, surrendering 245.8 passing yards per game. Aggie defenders specifically struggled in man coverage this past season, giving up numerous big plays on deep routes.

Lowest QBR allowed in 2020 amongst returning CBs with 30+ targets:

A&T finished 5-6 in their inaugural season in the Big South Conference – the program’s first losing season since 2011.

Reportedly, A&T coaches are also looking to add at least one more FBS defensive back transfer this signing period to pair opposite Prunty at cornerback.

If returning defensive backs Amir McNeil and DJ Crossen are both able to fully recover from significant injuries suffered in 2021, the A&T secondary could quickly go from being a glaring weakness to suddenly being a major team strength in 2022.

Note: Since Prunty’s brief stint at Kansas came during the COVID-affected 2020 season, he should have four years of eligibility remaining when he arrives at A&T.

Discuss this news on our A&T fan forum. 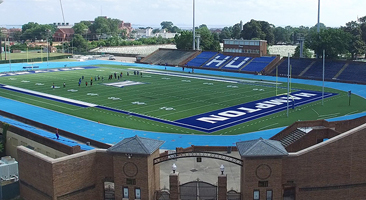