Comprised of individuals from all walks of life and from all regions of the country, the BDF currently boasts a membership base of over 100 officially recognized members.

Known for their vast knowledge of sports and their passionate display of enthusiasm, Blue Death Family members are a visible presence at most A&T athletic events. The BDF has also become firmly entrenched on numerous on-line message boards, earning the title of the “most powerful fan organization on the Internet.” However their support for A&T goes well beyond cyberspace or stadium venues. Since its inception, the BDF has contributed financially to the university’s various fundraising initiatives and currently works in concert with the National Aggie Club and the Victory Club. In 2007, the BDF organized a first-of-its kind online fundraiser which generated $3500 for the football recruiting budget. 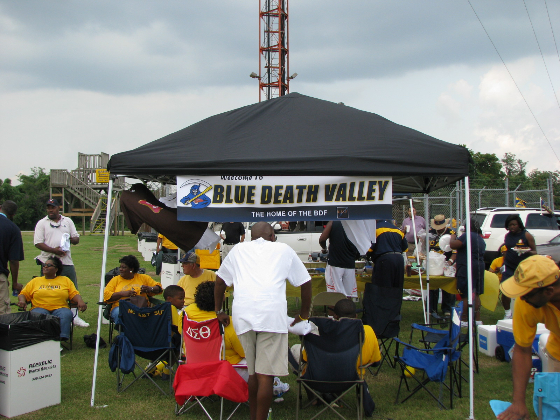 History of the BDF:

In 1999 a small group of A&T fans began to gather on a then-fledging website named meacfans.com to discuss black college athletics and interact with fans of other HBCU programs. Through the course of time, these A&T fans began to form a common bond and, realizing that there was strength in numbers, eventually decided to create their own fan organization. After undergoing an extensive search for a name, these Aggies finally decided to call themselves the Blue Death Family and later created an official BDF seal.

In October of 2000, following a huge victory by A&T’s football team over Florida A&M University, the BDF announced its existence to the public for the first time. Over the years, the BDF has seen its influence and power grow exponentially, thanks in part to a tight-knit organizational structure and progressive, forward-thinking leadership.

Today the BDF continues to evolve from its Internet fan club roots and has successfully launched its own signature clothing line, Bluedeathgear, and recently unveiled its own popular website, Bluedeathvalley.com.