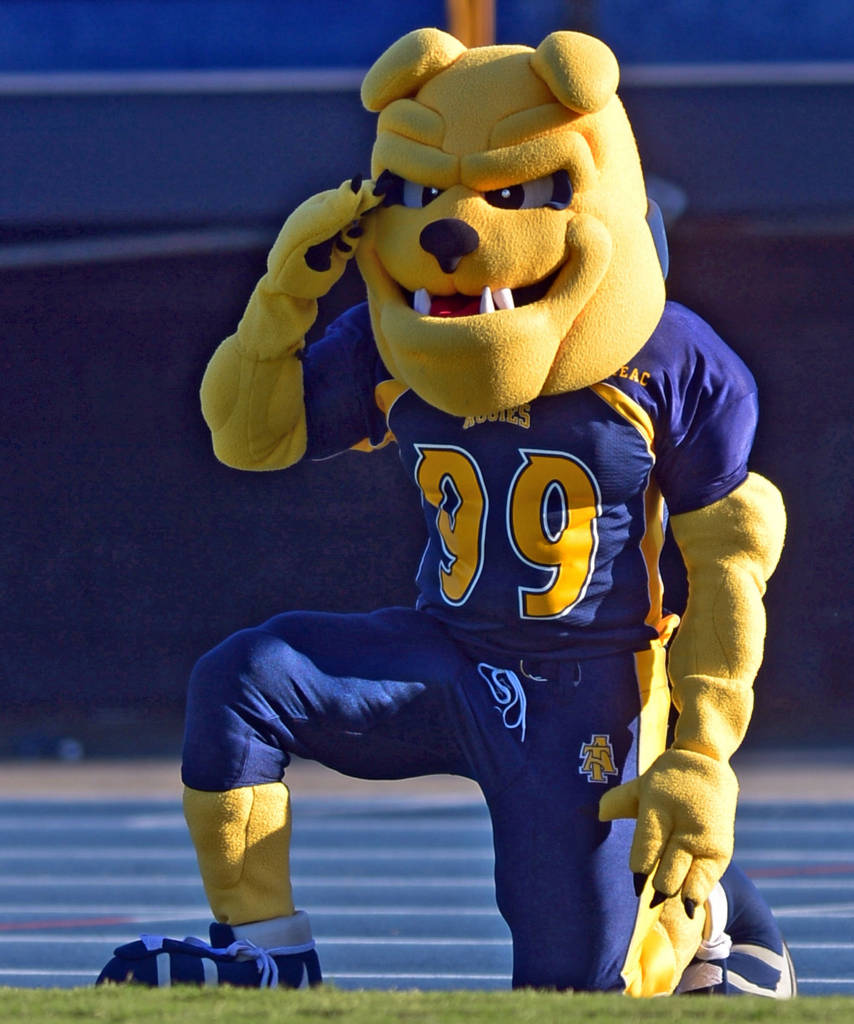 The term “Aggie” has long been used to refer to students who attend agricultural schools. Hence the reason North Carolina Agricultural and Technical State University adopted the nickname “Aggies” when the school was founded in 1891. However, for as long as people can remember A&T has also used an image of a bulldog to represent its various athletic teams. The following story, written by Dr. Albert W. Spruill sometime in the early 1970s, was abstracted from conversations with alumni and faculty members and may shed light on how the A&T bulldog mascot originated.

“AGGIE” GETS HIS MAN:

In the early days of Alma Mater, an old shepherd dog was kept down on the farm to assist in herding the cattle and other animals into shelter. He was a legendary figure and frequently would be seen sloping across the farm behind the herdsman. The old shepherd dog either died or was carried away with the change in herdsmen. When a new herdsman was employed sometime in the twenties, he brought along or purchased another dog to assist in the herding of the cows.

This time it was a bulldog.

How the “Bulldog” got to the football game is difficult to speculate. Perhaps a group of students brought him, knowing that there would be some trouble or perhaps he came along with the herdsman. The fact was evident that he was very much there (as will be observed later in the story), and it seems that he was tied in order that his viciousness could be kept under surveillance.

The football game was a rough and tumble affair and the Aggies had become despondent. The fullback was bursting through the line on play after play- even scoring now and then- over the opposition’s defense. But the referee did not seem to think so and called each touchdown back.

Finally, in the last few minutes of the game, the big fullback broke through the opposition’s defense and scored a touchdown. A big roar naturally thundered up from the crowd for the Aggies, but when the clamour died down to a hush the referee threw up the sign “No Good.”

Just at this moment someone untied the bulldog and he tore into the referee. Down on the ground he went and the bulldog began to work him overtime.

It almost cost A. and T. College membership in the CIAA, but it vindicated the Aggies. For if ever there had been a howl from the team and fans it was this day when the referee concluded that the team could not do anything right. Since this day the mascot for the A. and T. College football team has been called “Bulldog.”

In more recent years the mascot was made into a “bulldog” statue which was displayed on the campus quadrangle and aroused a number of unique incidents of skillful acts of theft by opposition football teams just before a big game. This was followed by a corresponding strategy used by loyal Aggie fans to effect its recapture.

The bulldog has advanced to a complicated mechanical terror in the last two years. The giant growls, barks, wags it’s tail, and it’s eyes light up when the Aggies score at home games. Designed by students in the engineering department, this will help A&T remain a member of the infant Mid-Eastern Athletic Conference.