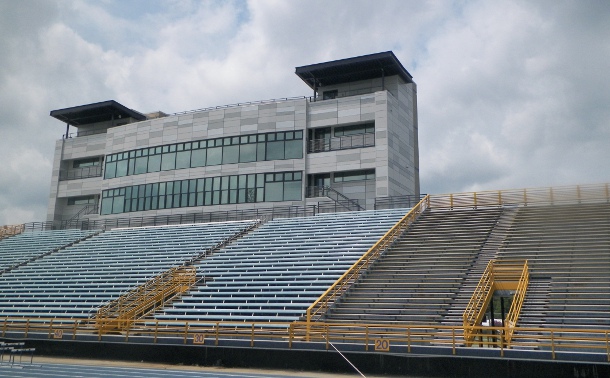 To a diehard Aggie fan it’s as revered as the friendly confines of Wrigley Field; its manicured grass is as hallowed as the parquet floor of the Boston Garden. For over two memory-filled decades, Aggie Stadium has conjured up similar feelings of pride and nostalgia in the hearts and minds of North Carolina A&T football fans everywhere.

Located of the north end of A&T’s sprawling campus, this quaint yet attractive arena has become the crown jewel of the entire university. Occupying 125,755 square feet, Aggie Stadium features a horseshoe-shaped design and boasts a permanent seating capacity of over 23,000- although nearly 35,000 have been accommodated in past years for special events. It’s natural grass playing surface is encircled by a recently installed Olympic- caliber track. Behind the northeast endzone sits a majestic 25,000 square foot field house, which includes two locker rooms, a large multi-media/ meeting room, and a fully-stocked workout facility.

On game day, the atmosphere at Aggie Stadium is one of the most exciting in all of college sports. From the sheer pageantry and musical explosion of A&T’s world renowned band- the Blue and Gold Marching Machine- to the legions of screaming Aggies fans draped in blue and gold, A&T games are truly an event to experience. Opposing teams who struggle to overcome it’s aura and mystique rate it as one of the toughest places to play in all of 1-AA football.

Aggie Stadium was designed by the late W. Edward Jenkins, a famed A&T alumnus, and was constructed at a cost of more than $2.5 million. The first game played there was against Winston Salem State University on September 12, 1981. An overflow crowd of more than 23,000 fans watched the Aggies win their inaugural home opener that day, 21-14. Before that, A&T played its games at Greensboro’s War Memorial Stadium, the home of the nearby minor league baseball franchise.

For the first 14 years, Aggie stadium’s permanent seating capacity stood at 17,500. However, in 1995 the stadium underwent a major expansion in which 5,000 additional seats were added in the south end zone area to complete the current horseshoe shape and raise the seating capacity to over 23,000. In 1999 a donation by the Ford Motor Company allowed for the construction of stadium lights for night games and an electronic marquee outside the stadium grounds.

In 2001, A&T opened the Joseph and Kathleen Bryan Fitness and Wellness Center behind the stadium’s northeast end zone, which served as a dramatic upgrade from the Aggies’ previous dressing room quarters and workout area. The state-of-the-art Bryan Center cost more than $3 million to build and furnish.

In 2004, construction was finally completed on the Irwin Belk Track- an eight lane, Olympic-caliber facility named after the former president of Belk Department Stores who donated two million dollars toward the completion of the project.

Prior to the 2005 season, A&T unveiled a gigantic digital scoreboard in the north endzone of Aggie Stadium that has become a visual landmark for the entire campus. Measuring approximately 66 feet high and 48 feet wide, the scoreboard has a 23-foot video screen and a state-of-the-art sound system.

Most recently, the school completed work on a three-story press box expansion project that features an elevator and several spacious luxury suites.

To date, the largest single game attendance at Aggie Stadium was in 2001 when 34,769 people crammed inside the stands and temporary bleachers to witness A&T’s 55-23.